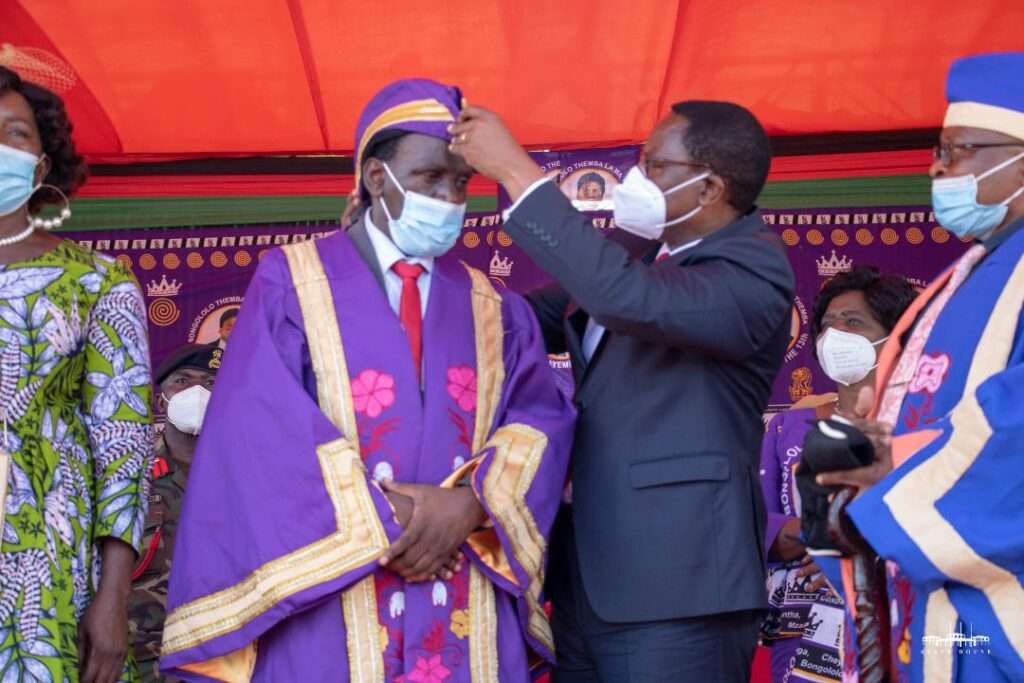 Over 50 private security men dressed in T-Shirts branded ‘’Bongololo Barracks were reported to have been hired by the Royal family of Mr. Joseph Bongololo Gondwe to cover the boss as President Dr. Lazarus McCarthy Chakwera was installing him to be Paramount, Themba la Mathemba Chikulamayembe the 13th at Bolero in Rumphi district on Saturday.
After the disputed May, 2019 Presidential Elections, Msundwe Barracks was established to provide cover to the Human Rights Defenders Coalition [HRDC] sponsored demonstrations in a battle for electoral justice in Malawi.

Msundwe Barracks travelled all the way from home in Lilongwe to Blantyre to witness the official presentation of nomination papers to the Malawi Electoral Commission [Mec] by the Tonse Alliance’s torchbearer, Dr. Lazarus McCarthy Chakwera and his Vice, Dr. Saulosi Klaus Chilima.
Malawians have this time been awaken of the ‘’Bongololo Barracks’’ to cover Mr. Joseph Bongololo Gondwe in a battle against their family members of Mtima Gondwe in the presence of the country’s President, Dr. Chakwera.
On Saturday, the Royal family of Mr. Mtima Gondwe was set to install one of their own who was acting in that capacity as Paramount Chief Chikulamayembe of the Tumbuka Clan while on the other side President Dr. Chakwera was presiding over the installation of Mr. Joseph Bongololo Gondwe as Paramount Chief Chikulamayembe.

Malawi Police Service [MPS] deployed its officers in uniform and civilians at Chikulamayembe’s headquarters to quell the tense situation by firing teargas canisters in the air to disperse the angry youth who were staging protests by burning tyres.
The cops were reported to have gone to the residence of Mr. Mtima Gondwe where some youths had gathered, they fired teargas to disperse them as this was not enough MDF soldiers were deployed after reports that Mtima Gondwe’s camp had blocked the road to Bolero, cutting down an ESCOM pole so that they should be no power to the installation ceremony.

Speaking at the function, President Dr. Lazarus McCarthy Chakwera advised the newly installed Themba wa Mathemba Chikulamayembe to reconcile with people from the other family members for peace and unity to prevail amongst them.
…..’’I am all aware of the misunderstandings on who is the rightful heir to the throne, start a new chapter for the good of all family members,’’….said Dr. Chakwera.

Meanwhile, pictures which have gone viral on social media platforms have captured Mr. Mtima Gondwe kneeling down at the feet of Mr. Joseph Bongololo Gondwe newly crowned Paramount Chief Chikulamayembe, apologizing for the offence not yet made public.