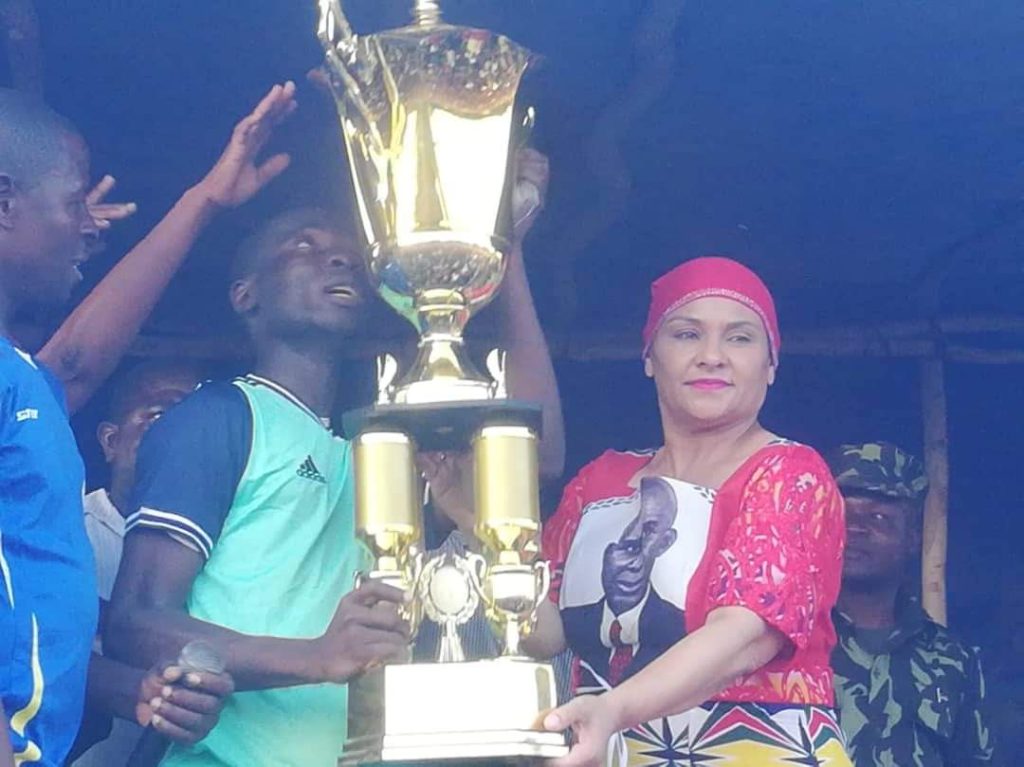 Member of Parliament (MP) for Chikwawa Nkombedzi who is also Minister of Water and Sanitation, Abida Mia has pledged to launch Sidik Mia Memorial Trophy in April next year (2023).

Abida Mia said the trophy will be played in the twin districts of Chikwawa and Nsanje.

Mia was speaking, Sunday at Mailosi ground in the area of Senior Chief Ngabu in Chikwawa district during the final match of her K10 million trophy where Malikopo Reserve where facing Chambo Football Club.

“I want to complete all five zones with finals namely, Four Ways, Therere, Nsenjere, Saopa and Nkumaniza then I want to launch the trophy for the two districts as you know that my late husband was loved and supported by all people from both districts.

So I want to celebrate his life together by having memorial trophy. Anyone can understand that my late husband was a hero and one of the giants in the Shire Valley area when it comes to politics and fostering development hence the need to have special time to think about him besides celebrating on what he achieved while he was a live,” she said.

On her trophy, the minister said this was in line with her campaign manifestos whereby she pledged to support youth activities in order to deter them from getting involved in immoral behaviors.

Constituency football committee chairperson, Patrick Mtasa said, the K10 million was divided in five zones and each zone battled it out for K2 million.

Said Mtasa: “For instance here at Four Ways zone about 32 teams got registered from Mikalango River up to Nkombedzi River. After all games were played, Malikopo and Chambo from Salabeni village were dating to the finals. As we have witnessed Malikopo trashed Chambo 3 – 0 to be crowned champions.”

“Yesterday Four Ways Reserve hammered Nido 3–2 and finished on third position. We are happy that during entire period of playing games about three months all teams participated peacefully without any report of abandoning the game including hooliganism,” he said.

Chairperson for Four Ways Football Committee, Sheriff Suzumire commended participating teams for observing the rules and regulations of the game. He further asked the minister to organize another trophy soon so that the youth should continue to have something to keep them busy.

Late Muhammad Sidik Mia passed away on 12th January, 2021 after he succumbed to Covid-19.