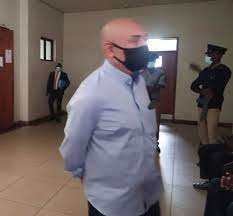 The wrangle for land between the Department of Museums and Platinum Investments Limited has been settled with the Department reclaiming legal owenrship of the land in a heavily contested court battle.

During hearing of the case, it has emerged that Former Lands Minister, Henry Dama Phoya SC, who also happens to be Karim Batatawala’s lawyer in an ongoing Fraud and Money laundering case, wrote a letter to former Minister of Tourism, Wildlife and Culture Rachel Zulu, with reference number LH/2/A/2 dated March 6, 2013 which had the heading: “Repossession of museum offices currently being used by the District Education Manager, Blantyre Urban.

According to the letter authored by Phoya, the effect of the Museums (Dissolutions) Act, 1981 was that the land which was freehold when the Museums Trustees of Nyasaland purchased it, automatically changed its status from freehold to public.

Platinum Investments had dragged the Museum Department to court for failing to acknowledge the company’s ownership of the disputed land and demanded K394 million in damages and K11 million in legal fees. Court records show that Platinum Investment Limited filed a claim for a declaration that the conduct by the Museums of Malawi in preventing the Company from developing its land and/or exercising rights of ownership on the said land was wrongful.

In his ruling, Justice Mike Tembo, said Platinum Investment Limited failed to prove its claims to the requisite standard, and faulted the Ministry of Lands for acting in an opaque and bizarre manner in relation to the matter at hand.

“One would ordinarily have expected the Ministry of Lands to have consulted or at least provided information to the Department of Museums in the process of taking away of the land herein or as the issue was being considered by the relevant Ministry of Lands. In a typical dereliction of the duty of good public administration, the Ministry of Lands unilaterally dealt with the land for the benefit of the claimant and to the detriment of the Department of Museums. In that scenario, this Court is not persuaded that the claimant would have cowered in fear of letters of protest from the Department of Museums in relation to the land that the claimant obtained in the circumstances herein and not developed its land herein as a result.”, reads part of the ruling