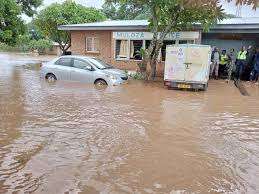 Chikuli Bridge along Mugabe Highway to and from Mulanje rendered impassable; Travelers advised to use Thyolo Road

“`◾Travelers to and from Mulanje have been advised to use Thyolo Road as Chikuli Bridge along Mugabe Highway between Nkando trading centre and the junction turn off to Mulanje Boma has been rendered impassable as the heavy rains that is accompanying Tropical Cyclone Gombe rages on in most parts of the Southern Region since Friday.

This follows the swollen up of Ruo River which is transferring excess water to this spot where high water levels flows on the bridge’s deck since the approaches from both sides were not raised up upon construction of the bridge.

Mugabe Highway — all the way from Limbe — has very compromised spots where water flows onto the road due to lack of proper drainage, hide dangerous potholes — which can cause tyre bursts of hit at high speed since motorists have to in order to overcome the strong water follow.

When constructed or even maintained, most of Malawi roads are not raised up on low laying spots by building culvert bridges for water to flow beneath the road — an engineering and funding incompetence of concerned authorities.

Car collision accidents can easily happen on many spots when trying to instinctively avoid a pothole seen at last minute which had been hidden by flowing or stagnant water.

Meanwhile, the heavy rains — which is as destructive as that caused by January’s Cyclone Ana — has also compromised Makande Tea Estate’s Thunga Dam spill way, which has collapsed and its overflowing water is threatening downstream communities.

Thyolo District Commissioner Douglas Moffat has since sent a warning to the threatened communities to evacuate with their property since the  persistent rains are threatening to completely break the dam wall, whose strong force of water flow could destroyed every property downstream.

The heavy downpour has caused Thyolo District’s Minembo and Msuwadzi rivers to swell, which feeds the Thunga Dam.

The DC’s office indicated that remedial works are underway to save the situation.

The Department of Climate Change and Meteorological Services (DCCMS) warned on Friday that the cyclone was expected to be associated with heavy rainfall that may exceed 100mm in 24 hours — a situation which might trigger the occurrence of flash floods.

The warning specified some of the districts that might be affected by Tropical Cyclone Gombe-induced floods that included Thyolo, Mulanje, Nsanje, Chikwawa, Phalombe, Zomba, Machinga, Chiradzulu, Blantyre and Mangochi.

Initially, the Department has indicated that the looming Tropical Cyclone Gombe, which was expected to affect southern parts of Malawi, was to start from Saturday to Sunday but it began on same Friday afternoon.

A public alert from Charles Kalemba, commissioner for disaster management affairs for the Department of Disaster Management Affairs (DoDMA), advise the general public on Friday to take the following precautions to save lives:

DoDMA further said it had deployed a search and rescue team comprising the Malawi Defence Force, the Malawi Police Service and the Malawi Red Cross Society to Lower Shire Districts of Nsanje and Chikwawa — to be on standby to provide life-saving interventions in all the districts at risk.

The department is also prepositioning and stockpiling relief items in strategic places to ease provision of relief assistance in districts at risk of being affected by the Cyclone Gombe.

DoDMA — working with the Malawi Red Cross Society, is also sensitizing communities at risk, through airing jingles on radio stations and mobile vans.

As of Friday, many parts of the Southern Region have been experiencing persistent power blackouts inconsistent of the scheduled load shedding.

What is annoying people is that Electricity Supply Corporation of Malawi (ESCOM) is not issuing any situation reports to explain to concerned residents up until they call ESCOM’s faults reporting numbers.

Also many parts of Blantyre are experiencing dry taps and again without Blantyre Water Board’s explanation and assurance of the remedies underway.

BWB usually piles blame on dry taps on ESCOM when it is challenged with supply of power since BWB relies on ESCOM power to pump water up to Blantyre through Walker’s Ferry.

The two cyclones destroyed infrastructures in many parts of the country such as roads, power lines, Kapichira Dam for Electricity Generation Company (EGENCO), construction of the Shire Valley Transformation Programme in Chikwawa.

Most of the infrastructure got compromised such as the roads and Kapichira Power Station due to lack of proper sustainability — just as is the case of Makando Estate’s Thunga Dam, which might have been ignored without assessing the dam’s spill way lifespan.“`