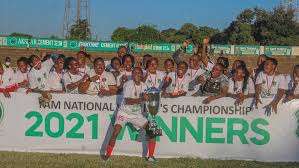 NWFA chairperson Suzgo Ngwira said in an interview on Monday that considering how the Football Association of Malawi (FAM) National Women’s Championship was run, they are ready for the national league.

Blantyre Zero celebrate with the trophy after beating DD Sunshine
She said: “The national championship was an acid test on the state of preparedness for the national league.

“We had nine teams [three from each region] competing in the national championship and this time we delibarately included an element of travel and gave the teams a K1 million subvention each and we did well.

“We had 20 matches and it all worked according to plan. Of course, there were some challenges which we will be working on between now and next season, but generally we believe we are ready.”

Ngwira said the national league will have eight teams.

She said: “Between now and next season, we will be finalising negotiations with potential sponsors.

“We will also engage other stakeholders such as Sulom [Super League of Malawi], regional leagues, National Youth Football Association and the national referees body on logistics such as venues.”

He said: “The game is now very competitive and well organised. It is gaining popularity as most girls want to play football to rival the boys.

“So, the national league is the way to go, but we need to adopt a format that is cost-effective and easy to manage so that it is sustainable for all parties.

“It is our sincere hope that women’s football will be able to secure sponsorship as we expand our footprint and become an attractive brand in sports.”

China-based Scorchers captain Tabitha Chawinga, who co-sponsors DD Sunshine of Lilongwe, said while the country is now ready for a national league, the issue of sponsorship should be critically looked addressed.

She said: “Of course, FAM is trying its best to support women’s football, but for the national league to run smoothly, there will be need for corporate support to level the playing field in terms of sponsorship.

“It’s good that the national league will finally be launched next year, but the issue of sponsorship remains critical as most of the teams are still sponsored by individuals and I urge the corporate world to support women’s football as they do with the men’s game. That is the only way we can achieve our goals.”

FAM sponsored the tournament to the tune of K32 million.“`