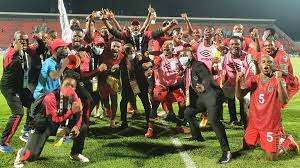 “`Football Association of Malawi (Fam) is next week expected to decide on who will lead the Flames during the 2023 Africa Cup of Nations (Afcon) and Chan qualifiers.

The Flames were seeded from the preliminary round of the 2023 Afcon qualifiers but will join in the group stages slated to start in June.

Before the Afcon finals in Cameroon in January and February, Fam Technical Director Marian Mario Marinica was appointed interim coach and Meck Mwase was relegated to the position of assistant.

Mario was also in-charge of the Under-23 which played two friendly matches against Kuwait and Togo in Antalya, Turkey last week.

The developments mean Mwase, who has a running contract until May 2023, faces uncertain future. Inside sources confirmed that Fam Executive Committee meeting slated for next week will make a decision.

Since returning from Afcon finals, Marinica has been on top of all things while Mwase has been silent.

Mwase recently refused to comment on the issue regarding his future as Flames coach.

On Thursday, Marinica also dodged the question on who will be in charge of the team during the Afcon and Chan qualifiers in June.

“Please let us not start the speculation game,” he said in a brief response.

“He is the head of the technical aspect and he is also mentoring all national teams coaches. We believe that by the end of his three-year contract he will impart knowledge to our local coaches,” Mpima said.

Mwase made history by becoming the third local coach to have guided the Flames to Afcon finals after finishing third in Group B which comprised Uganda, Burkina Faso and South Sudan.

Then, Malawi qualified with 10 points, two behind Burkina Faso, who qualified as group leaders.“`